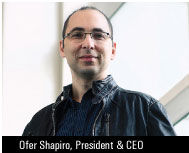 Ofer Shapiro, Dr. Alex Eleftheriadis, Avery Moore
For many years, legacy video conferencing did not meet user expectations. Outside of expensive telepresence rooms, the quality was inconsistent. Hackensack-headquartered Vidyo, founded in 2005, changed the industry by offering a system that provides ease of use, scalability and a high-quality experience, based on a completely new architecture.

Vidyo's solution does not require dedicated networks and reduces costs by leveraging the VidyoRouter™, which utilizes scalable video technology (SVC) to provide everyone their own, reservation-less meeting place. In the past, video conferencing infrastructure required full racks of propriety hardware. Now it can be cloud based on a handful of virtual machines. Vidyo's infrastructure can be accessed from any device: smartphones, tablets, laptops, desktops and immersive room systems, and can connect with legacy endpoints as well. Vidyo runs over non-QoS networks so that anyone on an Internet, LTE or 4G connection can participate in a high-quality video conference from any location in the world. Vidyo's product portfolio delivers comprehensive support for end user platforms and includes client software for most mobile devices and desktop operating systems. Vidyo also offers small and large room solutions, recording functionality, and can be deployed as a private or public cloud solution. This paradigm shift in video communications has had a tremendous impact on the industry.

Most solutions available from legacy players in today's visual communications market are simply not affordable for many types of organizations and users nor are they capable of scaling for large deployments. Legacy video conferencing solutions require dedicated networks and massive amounts of proprietary hardware – unlike Vidyo which works over the Internet, general IP networks, 4G or LTE connections and can run on virtual appliances. Vidyo is the only solution on the market today to offer high quality, massive scalability, affordability and access to anyone on virtually any device.
The VidyoRouter™ eliminates the need for the older, Multipoint Control Unit (MCU) model that requires massive computation, transcoding and decoding in order to deliver multiparty interaction. The VidyoRouter enables artifact free, low delay, video collaboration with unprecedented error resiliency and low latency rate matching resulting in natural, affordable, high-quality video conferencing. Vidyo continues to be the industry's primary source of technological innovation, driving the future of video communication to accelerate creation of innovative guidelines that move the industry forward.

Testament to The Claim

CERN, the European Organization for Nuclear Research, uses Vidyo to support global, large-scale, real-time collaborative video conferencing among a community of 20,000 scientists from over 600 institutes. Vidyo is also being used in many academic communities such as Internet2, and universities such as Carnegie Mellon and Northwestern, and has corporate customers such as Mozilla.

Vidyo remains committed to transforming the way the world communicates and collaborates with the backing of distinguished investors. In April of 2013, the company announced a $17.1 million round of financing, bringing the total amount of net capital raised by the company to $116 million since its founding. Vidyo's growth will continue to be driven by a new way of selling video conferencing, allowing Vidyo's partners and customers to incorporate video communications into devices and applications people use in their regular work environments and daily lives. Vidyo continues to innovate in the industry by providing new collaboration technologies, and working towards driving standards such as WebRTC (through the relationship with Google) and H.265. 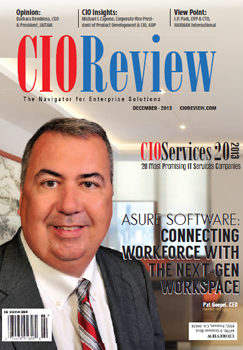